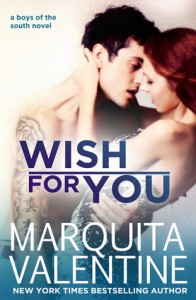 I was given an ARC of this book for my honest review.
3.5 stars

Lacey has had panic attacks since she was a little girl, doctors brushed it off saying she would grow out of it, she has built a structured life for herself with a routine and rules. Her life has to change when her parents leave to go on a mission to Turkey; she has to find a new place to live and create a new routine. Her best friend Wyatt has always been there for her, she loves him but she has her reasons why they can't be together. Wyatt is a Marine veteran, a hero and everyone loves him, but he is hiding a secret he came back from the war with PTSD and he masks his pain in alcohol, drugs and women. Lacey makes him feel alive and helps him keep his sanity but with her pushing him away, he is drowning in his pain, can they get past their problems and find a way to be together? Wish for You is the fourth book in the Boys of the South series you don't have to read the other books first to know what's going on, but some of the other characters from those books make an appearance in this one, so it does help to read those to get some background info. I enjoyed reading this book, it was a bit of an emotional roller coaster for me and at times I was frustrated with the characters because they were hurting each other. Lacey had to have things a certain way, or she would have panic attacks; it was horrible, I felt terrible for her and I wanted to drop kick all the doctors who told her she would "grow out of it." She also frustrated me to no end sending mixed signals to Wyatt, I know why she believed it was best not to be with him but at the same time I thought it was cruel to mess with him the way she did. Poor Wyatt he was so messed up I wanted to give him a cuddle and make everything better, the things he did to forget about what happened were terrible but at the same time I can't blame him. A few times while reading the book I was a little bit taken back by the things that Wyatt said, I wasn't big on what he said during the first full on sex scene with Lacey, it did not float my boat. Other than some of the things Wyatt said and Lacey's back and forth, I liked this book and think it was a good addition to the Boys of the South Series.
Tweet