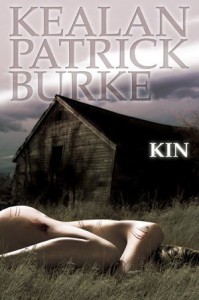 In the backwoods of the South there is a small town long forgotten about where a family has been given free reign to carry out their God given mission to rape, torture and eat people in hopes of riding the world of the people who poison it. Fear of this clan has kept people silent, greed has kept the law away from them but one women will get away and Claire will change everything. Stumbling away from the place hurt, broken but completely beaten two men will come upon her, her friends who were killed have family and a broken soldier will feed his need for vengeance. The cannibalistic family will turn from hunter to prey and things will come back full circle when everyone decides it's time to return to the scene of the crimes. I picked up and started reading this book all because of a couple updates and a burning need to find out more about a Pizzle. I really loved this authors writing, the way everything is described you can see and smell every little thing. While at times it was absolutely disgusting, it really brought the book to life and it showed how utterly depraved this family was.

Claire was a strong character, I really liked how she went back to try and confront her demons so to speak. Pete the simpleminded savior was one of my favorite characters, he was just kind of there but he had his moral compass of what he believed was right and wrong. They reminded me a bit of Forrest Gump and Jenny.

Finch and Beau the vigilantes, Finch was just plain broken yes he was trying to get vengeance for his brother but it seemed like a part of him liked the violence. Beau was there to support his friend, he seems like the type of person that you could say so I'm going into Hell to steal from the Devil and he would say what do need from me? There were a few other supporting casts in the story but I don't think they really added anything to the story, besides Chief Chickenshit and all he did was piss me off and confuse me a little at the end. Lastly we have the family of hillbilly's they were a whacked out, dropped on your head several times and should have been shot type of family. The father and mother have taught the kids to rape, torture and eat people, they are getting rid of people because that is what God wants them to do.

I was pretty much loving this book only a couple things were irritating like Claire's sister she was bitch, no it wasn't scaring me because these types of books don't scare me then I got to the end and was like

The end took this from a four, four and half stars down to a three and a half it was so terribly anticlimactic and disappointing. Other than my own hang ups about the ending, this really was a good book and I would recommend it to anybody looking for a good gory horror story.