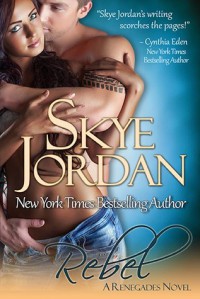 I was loving this book, the interactions between Wes and Rubi pulled me in from the beginning. Then I got to 37% a sex scene, Rubi sleeps around a lot, she is all about the one night stand

I'm fine with her sleeping around with random dudes, my problem is when it came time for her to have sex with Wes the two of them don't use a condom

Why don't they use a condom, oh it's not because they are so lost in passion they forget or protection isn't mentioned in the book. Nope as a matter of fact Rubi says she will go get a condom but Wes says you're on birth control and I'm clean, she's all yes and I'm clean too. So no condom because somehow not having one makes Wes different than all the other guys she banged before. I'm tired of reading books where they discuss safe sex then completely throw aside everything they just talked about. It doesn't enhance the scene all I can think is I hope that man/woman whore you love so much isn't giving you herpes but hey it's cool you're on birth control so you might not get pregnant because nobody ever gets pregnant on that.

So as much as I was enjoying this book after that scene that irritated me enough to rant about it, I had to just DNF the book.